After updating-by-reinstall to Ubuntu 20.04, I installed CLion via snap since that seemed more convinient than manually downloading a java installation. CLion is the best thing since sliced bread, or I mean a C/C++ IDE by JetBrains. Ubuntu snap is a packaging system made by Canonical and pushed hard in Ubuntu. Today I found out the hard way that snap auto-updates and that there is no way to turn that off permanently. CLion was updated, which I noticed because the process was killed. The update broke several key plugins for my workflow and the theme was weird. In this article I'll discuss my disgust, I as the owner of the computer want to be in full control, not some developer forcing their will, deciding I need auto updates. I ended up removing snap completely, and my next install will not be Ubuntu due to this.

Here is a picture after the auto update occured. 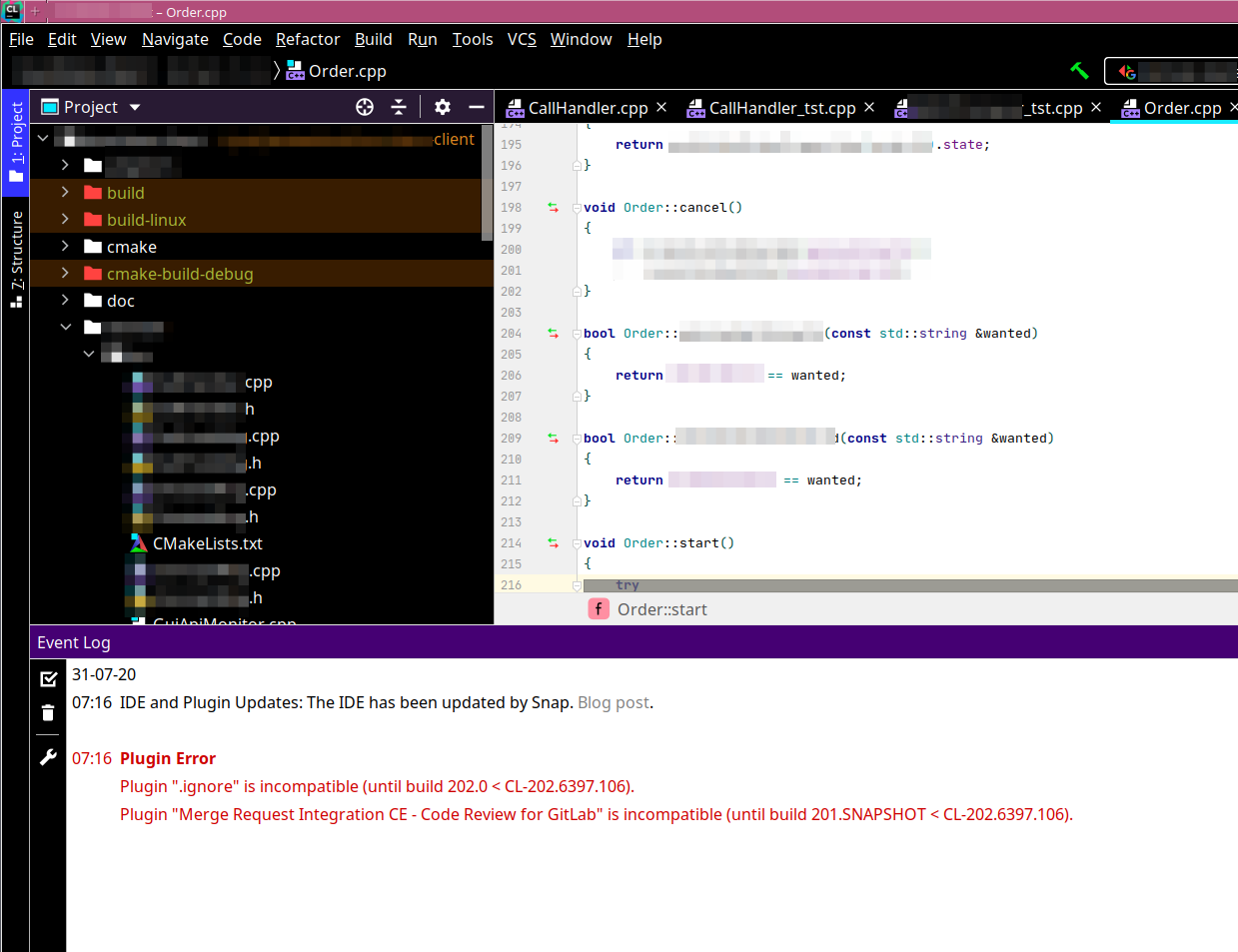 Not just the plugins on the screenshot broke, but also the plugin used to cross compile to ARM, which was the main issue. The theme issue was fixed after switching the theme to Dracula and back to High Contrast.


I do love auto updates and the security benefit, but I rather prefer to be in control on such an important system. I carefully apt update and snap refresh every week, but only after reviewing which packages are included in the update, checking changelogs and holding off CLion updates until they've been out for two weeks. With apt I can hold packages and if I want, disable unattended-upgrades, with snap, this is impossible.

A response to online comments on snap revert

In the reddit post, on Hacker news and Lobste.rs, most of the online comments mention that I could have just rolled back to the previous version of CLion by using snap revert clion. I was aware of that when writing the article, but that entirely misses the point. I don't want to rollback when something breaks. I want to be in control when things are updated. You don't service the engine onm your car while driving on the highway, even when you can fix things after you've crashed. You plan that maintenance. Just as I want to do with my software.

There is no way to disable snap updates. Yes you read that right. Ubuntu is worse than windows in this regard, because even Microsoft lets you, in company setups, disable updates (Windows 10 LTSC with group policies, or Windows 10 with WSUS).

There is a three year long forum topic but no solution is provided by the snap developers. The snap store / backend is also not open source, although the client is, you cannot configure any other snap store (like different apt repositories). So in theory, Canonical has full control over your computer and can execute malicious code without user intervention.

You know what the worst thing is? There is a sort-of disable option, but snap ignores that:

After a refresh, the next refresh can be delayed by up to 60 days, after which a refresh will be performed regardless of the refresh.hold value.

One workaround I found is to remove snap entirely:

Which is what I ended up doing. My next (re)install will also probably be Linux Mint since they disable snap and do let their users configure updates.

One other thing I found is people blocking the snap domains in their hosts file or setting up a proxy for snap (why does that not follow system wide settings? Another example of stupid developers reinventing the wheel I guess).

But, workarounds are as the name suggests, workarounds. Just give people the option to disable auto updates. Even if you enable them by default, let me be in control of what and when things happen.

After uninstalling snap and reinstalling the previous version of CLion via the regular java installation method, my plugins worked again. But it did take half an hour of my precious time and caused some frustration when I found out the utter stupidity of the snap development team for forcing their will on everyone. Vote with your wallet, stop buying / using Ubuntu and snap, otherwise it will only get worse.