I'm working on a Nitrokey/SmartCard-HSM cluster article and therefore I needed three identical computers. The current version of Raspbian (2016-05-27) is based on Debian Jessie and comes with a version of OpenSC that is too old (0.14) to work with the Nitrokey/SmartCard-HSM. Since there is no Ubuntu 16.04 official image yet I decided to upgrade Raspbian to Debian Testing. Since I don't want to answer yes to any config file changes or service restarts I figured out how to do an unattended dist-upgrade. 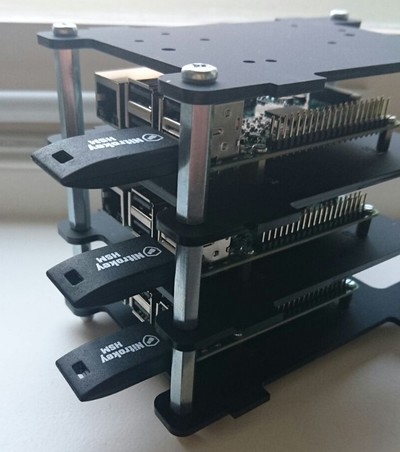 I have multiple articles on the Nitrokey HSM/SmartCard-HSM. I also have a lot of professional experience with large expensive HSM hardware.

Since Raspbian is a fork of Debian I first checked if there were any testing repositories in the mirrors and as it turns out, there are. Since the current version ships with OpenSC 0.14 and there is a 0.16 package in the repo here I suspected that that was the testing package. Installing it on Jessie failed however, so a dist-upgrade it was.

A regular repository change in sources.list and a dist-upgrade are very interactive. It involves manual editing and the apt upgrade asks a lot of questions, for example, retain a config file, restart services, changelogs, etc. Since I tend to reinstall Pi SD cards often I don't want to do that manual process every time. So here are the commands to do an unattended upgrade to testing. Which in my case works the 7 times I tried now, without asking questions. Do note that in your case it might hose your Pi and destroy all data and projects on it, so make sure you have a tested working backup.

Place this in a file named upgrade.sh:

Save it and then run it to start the upgrade:

Debian packages can prompt a user during install to generate custom configuration, or in the case of MySQL, set a root password. It can also have messages with different priorities. The critical priority is (almost) never used so it won't prompt you. The noninteractive frontend tells the terminal that you're not able to answer any questions.

The two Dpkg::Options mean the following:

If you supply --force-confnew instead of --force-confold it will overwrite any changes by the new config file.

If you want to install a package unattended you know will ask questions (like MySQL), then you can use debconf to set the answer to those questions beforehand (scriptable, yay). In the case of MySQL on 12.04:

You can view all possible selections (questions) with the debconf-get- selections command:

If debconf is not installed, the package debconf-utils provides it.