To level up my software development skills, I'm programming a command line game in my spare time. It is a clone of the famous cookieclicker game by ortiel. A clone of a game is simple enough to get up and running fairly quickly, but also extensible enough when needed. How do you store huge score numbers when they don't fit in a long long? How do you write a game loop, how to use threads to handle user input? Saving a game (how to design a proper save format)? Also a great way to learn about project organization, software architecture and to try out design patterns.

As the game is a clone of CookieCliker, which itself is an incremental game, I had to figure out how to work with large numbers. Since this is not a university math project, I allowed myself the luxury of using Boosts Multiprecision. The library handles the large numbers, including caluclation and operations with such a number. I did want to print the numbers in Idle Style, where large numbers are displayed with a suffix, like 1 million instead of 1000000 and so on.

This C++ class can be used to print Boost's cpp_dec_float numbers in incremental style. It's just one header. You can get the code here.

[If you like this class, consider sponsoring me by trying out a Digital Ocean VPS. With this link you'll get $100 credit for 60 days). (referral link)][99]

If you're wondering what Idle / Incremental game style is, let me show you. A lot of mobile games show numbers in idle style, here is a picture of one:

Here is a screenshot of my game, where you can see I have 5p cookies as well as prices for certain items with suffixes: 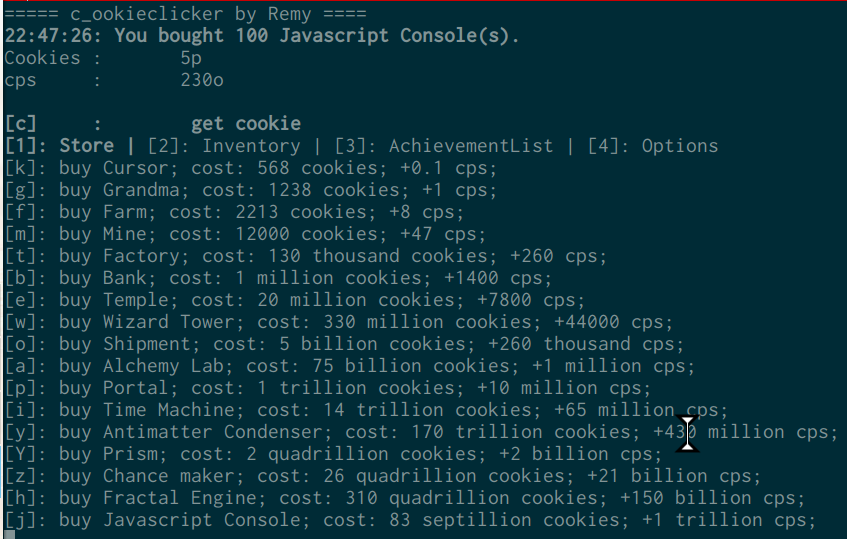 Even though one is a flashy Android game and one is a humble command line application, you see the idle style printing.

In the future I might show more of the game, or even make the git repository public. For now it's just me and a few friends.

I assume you have a working C++ compiler setup and have compiled before.

Go in the folder and cmake / make