Qt is a nice C++ framework with a GUI toolkit on top, actually, 2 toolkit, Widgets and Qml. Qt is available under the GPL and LPGL, open source licenses and a closed source license. Back in 2020, the Qt company decided to start a war against their own users and contributors by withholding the 5.15 code, only releasing them under a closed license, making the offline installers available to paid customers and requiring a Qt account for the online installer. Due to an agreement with the KDE project they are obliged to release the code after one year under an open source license, and that time has come for 5.15.3. For most LTS releases, the Qt company writes a blog post, but this open source release only gets a mailing list post (One day and 4 blog posts later, no mention of 5.15.3 on their blog). This short post is intended to give a bit more publicity to that release and to tell you about the KDE Qt 5.15 LTS patch collection. Even if I might not agree with the business practices, the framework is nice to work with.


I have a strong opinion on how the Qt company handles licensing, but that doesn't really adds something constructive to what the rest of the internet has already said, so I'll keep that to myself. The framework is nice, I like working with Qml, but the business side of things is, IMHO, a bit messy. I do like the fact that they oblige to their agreement and release the code, after a year. They have to, because if the Qt Company would ever attempt to close down Open Source Qt, the KDE foundation is entitled to publish Qt under the BSD license.

The KDE project maintains their own LTS patch collection. Quoting Albert Astals Cid, a KDE contributor, from this reddit post:

To be fair we are only backporting things we feel comfortable with to the kde patchset, so by rebasing the patcshet to 5.15.3-lts there's around 100 commits now backported that previously were not (I'll be committing those shortly (TM))

The backport commit can be found here.

At work we do have commercial licenses, for my own personal projects I use the KDE patch collection.

Do note that this patch collection is source only, no handy binary installers. The Qt 5.15.3 open source also only includes source code, no binary installers. For me, that's not a problem, I'm comfortable compiling Qt from source, but it's something to keep in mind. The online installer has no 5.15.3, in my (updated) installer I can only find 5.15.2: 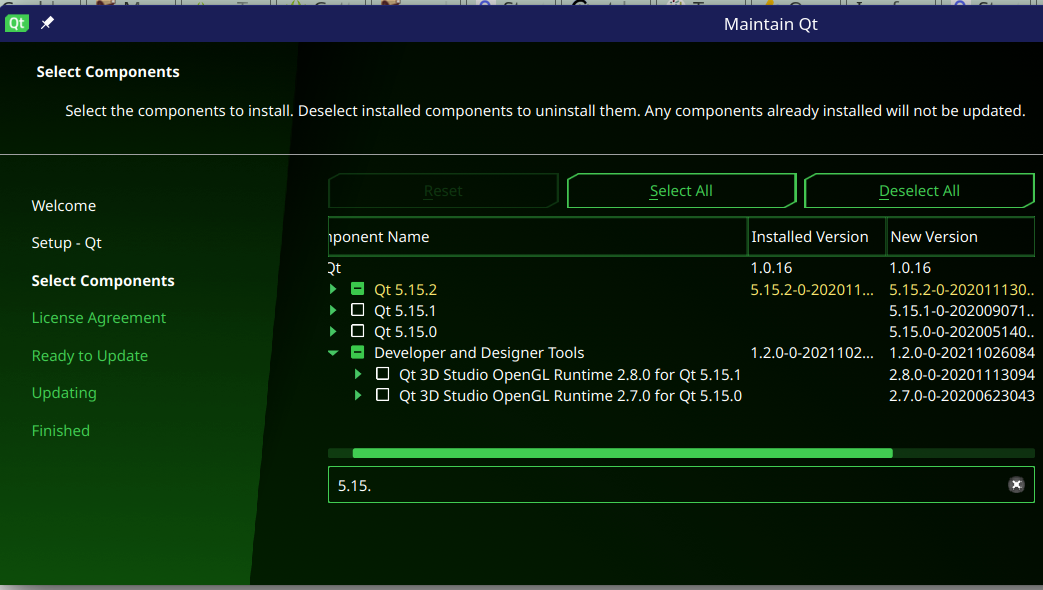 The download is a different from the closed version:

Most of the files I checked only differ in license: