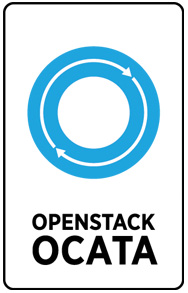 This article contains both an end user and OpenStack administrator guide to set up and use soft_delete with OpenStack Nova. If an instance is deleted with nova delete, it's gone right away. If soft_delete is enabled, it will be queued for deletion for a set amount of time, allowing end-users and administrators to restore the instance with the nova restore command. This can save your ass (or an end-users bottom) if the wrong instance is removed. Setup is simple, just one variable in nova.conf. There are some caveats we'll also discuss here.

There are some considorations you need to make when enabling soft-deletion. I'll discuss them below.

The most important one is that instances are not deleted right away. If you're a heavy API user, herding cattle (spawning and deleting many instances all the time), capacity management might be a problem. 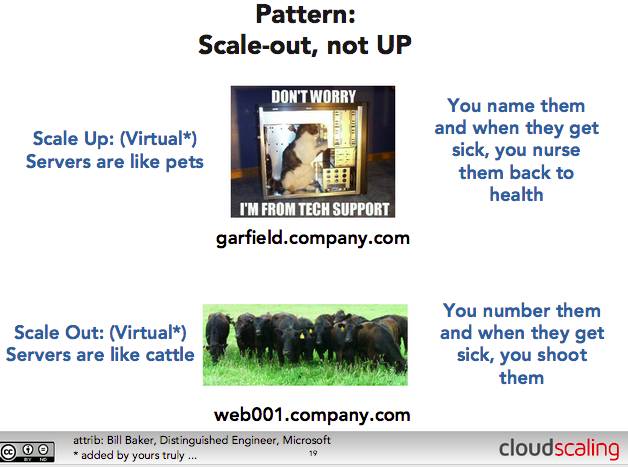 Let's say you set the reclaim_instance_interval to 3 days (because, what if a user removes an instance during the weekend, this is a ass-saver after all), but you spawn and remove about a hundred servers every day. (Let's assume you have cloud-ready applications, good for you). Normally, the capacity (RAM, disk, cpu, volumes, floating IP's, security groups) used by these VM's is removed right away. With soft-delete enabled, all of this will be reserved until after 3 days in this case. This means you need to have capacity to store 300 instances extra. This can be mitigated by using nova force-delete. This delete function skips the SOFT_DELETE state entirely. Or you can set the reclaim_instance_interval to a smaller amount of time. This is a consideration you should plan for based on the available infrastructure and usage patterns in your cloud.

The second caveat is that when you delete an instance, attached resources (Volumes, Floating IP's, Security Groups) stay reserved. If you need a volume that was attached to an instance that is soft-deleted, you first need to recover that instance, then detach the volume (or other resource) and then delete the instance again. Or detach the resource before you delete the instance. Normally, when deleting an instance, the resources are released automatically. If you use the API for resource management you need to take this into consideration as well.

The third is that a nova list doesn't show instances in the SOFT_DELETED state. Recovering can only be done with the UUID, so you must have noted that somewhere, or do a database query if you have that level of access. If a floating IP or volume is still attached to the VM, you are able to get the UUID from there, otherwise you're out of luck.

The positive part of soft-delete is that you can recover instances. I work for a large cloud provider and the amount of times we get the question from end users will suprise you. Higher up however decided that this feature should not be enabled, so we always have to tell users something along the lines of 'Time to restore your backups'. Mostly this is because of the extreme amount of resources being created and deleted, also because you just should have good backups (regularly tested).

In a private cloud setting this is a much better argument. Users there will probably remove the wrong instance and panic, call you, and you will be the hero of the day. In a public cloud this can also be a feature, marketing wise.

Now, after all the points, let's continue on to the setup.

You need to deploy this change to nova.conf on all your nova-compute servers and everywhere the nova-api runs (scheduler, conducter, etc). Restart the services afterwards.

After you've enabled soft-delete, create an instance (nova boot), attach a volume and make sure it boots:

A nova show will now show the instance as SOFT_DELETED:

The volume will still show as attached:

Horizon and other interfaces will probably show it as well: 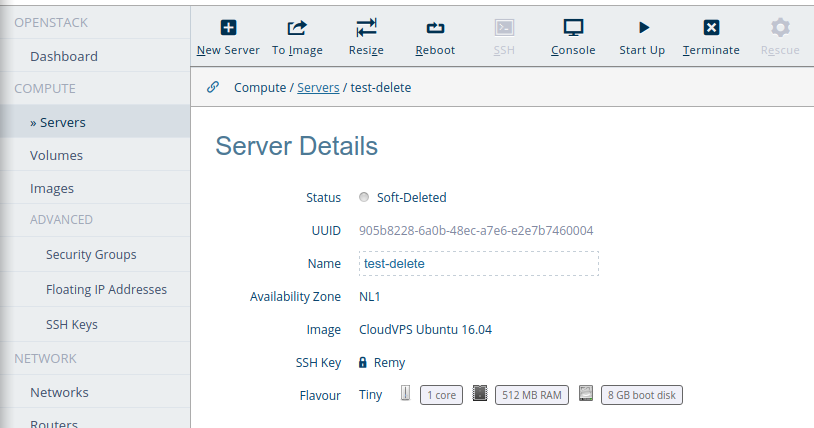 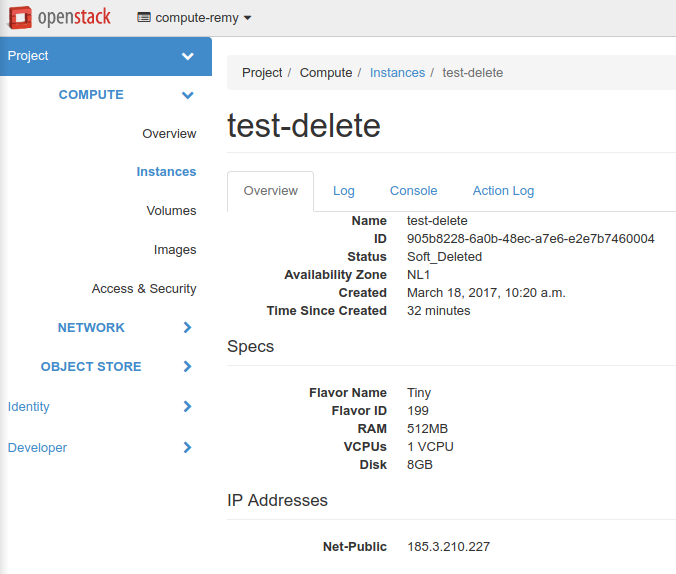 Using the nova restore command we can bring back the server:

There is no output. A nova show will show the server back in ACTIVE state, it will boot up as if it had a regular shutdown.

Now do this again and await the scheduler. If you then do a nova show, the instance should be removed and the volume should be released.

The nova restore action is by default not admin only. If you have a UUID you can restore an instance, if the public cloud provider has enabled this feature.

To test if it is enabled, just remove an instance and see if it goes into the SOFT_DELETED state with nova show. If so, send them a message / ticket asking what the scheduler timeout is, how long you can recover the instance.

Database query to get all soft_deleted instances

If you manage a private cloud and someone calls you to recover their instance, if you have access to the database of nova, you can execute the following query to get all instances in soft deleted state with their UUID. The caller will probably have a name, and otherwise a tenant id helps as well. Then just do a nova recover and you're all set: