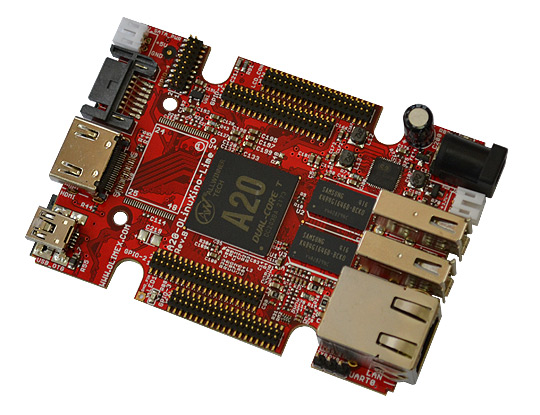 Sadly, the default Debian 7 image suplied by Olimex is bloated and huge. Perfect for the general tinkerer, has a Desktop Environment and a lot of dev tools and support for everything. Not perfect for me, I want a small minimal base to start and add up on that only what I need. This image takes up about 200 MB of space and uses only around 15 MB of RAM idle.

I took this image and stripped everything out of it, leaving only the bare minimum. Basically it only runs SSH and allows you to install the tools you need to build your project, without any other cruft.

It is also more optimized to run off flash storage, by default it has no logging, no locatedb updates, noatime mount option, this all reducing writes to the SD card.

The main features / differences from the Olimex provided Debian image (Debian 7 with kernel 3.4.90):

The kernel itself is still 3.4, the Debian version is 7 for armhf.

Feel free to mirror it wherever you want. If you like it or use it, you might consider sending me a nice email. Or, if this image helped you and you want to support me AND get $10 Digital Ocean credit (2 months free), use this link to order: https://www.digitalocean.com/?refcode=7435ae6b8212

If it is correct, continue. If it is not correct, retry the download.

Plug in your microSD card and use dmesg to see which device it is.

Please note that this image is supposed to be on the MicroSD card. I don't know if and how it works on the eMMC internal flash.

Write the image to the microSD card:

Afterwards, use a tool like (c)fdisk, parted or gparted to enlarge the second partition. It is only 500 MB, which is to small to use most of the time.

Plug the microSD card back in and boot the Olimex. It receives an IP address via DHCP. Check your router, the serial console or use nmap to find it. Log in as root with the password olimex.

If you want to install software, please apt-get update first, since the apt- lists are removed to save +100 MB.