On my laptop I recently had trouble with out of memory issues when running clion, firefox, thunderbird, teams and a virtualbox VM. To combat this, I've setup cgroups to limit how much RAM specific applications can use and configured earlyoom, a very nifty tool that checks available memory and kills the process with the highest oom_score if available memory falls below 5%. Otherwise, my laptop would first grind to a halt (even without swap) and only after half an hour of seemingly being stuck would the OOM killer kick in. With earlyoom this hanging behavior is gone, although sometimes applications get killed when I don't expect it. I've given firefox, thunderbird and teams a cgroup with memory limit and clion and virtualbox use their own configuration to limit their RAM usage.This post details how to setup cgroups to limit memory of specific processes including automatically placing process inside a cgroup.

I'm using Microsoft Teams in this example, that abomination of a chrome-browser / glorified IRC client has hardware requirements stating at least 4 GB of RAM, and that is way too much for what it's worth. Even my java-based CLion IDE doesn't use as much memory as Microsoft Teams. I've now given it 2 GB RAM max and it works just fine. 1.5 GB RAM also works in my experience. I think Teams has a memory leak because it starts with around 600 MB in use, but after running for a few hours, it is up and over 1 GB, eventually being killed by the OOM-killer in the cgroup. After restarting it's back around 600 MB again.


This post is tested on Ubuntu 20.04. As far as documentation tells me, it should work on Debian 10 and Ubuntu 18.04 as well, but I've not tested that. Documentation on cgroups is spread out and not coherent. When looking up documentation, make sure you know which cgroup version you use and for what cgroup version the guide is written. I try to avoid systemd-specific cgroup configuration (slices) since this post should also be applicable for non-systemd users. Therefore you'll see me poking around in /sys/fs/cgroup/ instead of using systemd tools.

I've ended up with the following RAM limits:

About 11 GB reserved, leaving a bit for all other applications such as the desktop. This limited configuration runs for a few days and I haven't had the out of memory issues. Using munin and the multips plugin I can see that the processes stay inside their given limits. Here is the munin graph that shows the specific processes I monitor:

java is CLion, and since the machine is not on all the time, there are gaps in the graph, but it is more than enough to give a general overview of usage. The default memory usage graph is fun to look at as well: 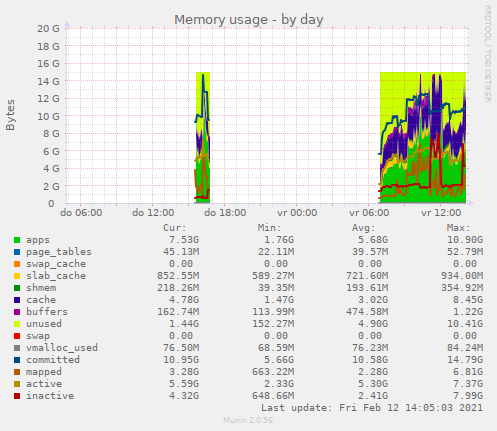 Starting off with earlyoom, as of Debian 10 and Ubuntu 18.04, available in the repositories, install it using the package manager:

You don't have to do anything more, when your memory usage drops below 10% it will start killing processes, by default the one with the highest oom_score. In my case that was often teams, but sometimes it was firefox. I've changed the settings to only kick in when memory usage drops below 5% and have added a few processes which I'd rather not have killed. kwin is the KDE window manager, when that was killed my window borders were gone. Fixed by a kwin --replace, but annoying. VirtualboxVM killing could give disk corruption inside the VM, which is something I'd also rather avoid.

Limiting memory per process with cgroups

cgroups (abbreviated from control groups) is a Linux kernel feature that limits, accounts for, and isolates the resource usage (CPU, memory, disk I/O, network, etc.) of a collection of processes. It's the magic behind linux containers (lxc/docker) and I'm using it to make sure specific processes and their children cannot allocate more than a given amount of RAM. On Ubuntu you must install the following package:

Create a cgroup, I named mine cgTeams:

Replace remy:remy by your username and group.

Set the maximum amount of RAM for the newly created cgroup. The calculation to bytes isn't required on modern linux, you could just enter 2048m but on older Debian systems you do need to specify the exact bytes:

If you have swap enabled, you can set a limit on that as well:

In the next few sections I'll discuss automatic creation of cgroups at boot and automatic placement of processes inside cgroups. If all you wanted was to give a specific process a RAM limit, not making it persistent, this is all there is to it.

What happens when a process tries to allocate more RAM than it is allowed?

On modern systems, the OOM killer will kill the cgroup-ed process. Quoting the kernel documentation on this one:

When a cgroup goes over its limit, we first try to reclaim memory from the cgroup so as to make space for the new pages that the cgroup has touched. If the reclaim is unsuccessful, an OOM routine is invoked to select and kill the bulkiest task in the cgroup.

I first tried to give Teams one gigabyte of RAM, which wasn't enough. Teams showed the splash screen and failed to start, dmesg -T showed me that it was killed right away inside the cgroup:

Firefox behaves fun as well with a RAM limit. Large webpages get killed and a funny message is shown:

dmesg -T shows that it is not the firefox process, but a child named Web Content:

Oh well, at least my machine doesn't crash when I open a large merge request on gitlab with hundreds of changes.

Activate cgroups at boot with cgconfigparser

When this is all working you can make it permanent by placing this configuration in the file /etc/cgconfig.conf:

Test the file for syntax errors:

The command should not give any output. For reference, I have three groups configured:

Enable and start the service:

On boot the cgroups will then be created via this service. Easy to adapt to other init systems like openrc.

You can continue on with the next section to automatically place specific processes into specific cgroups via cgrulesengine but, for a simpler solution, you can edit your desktop launcher to run the command prefixed with cgexec. Or a simple cronjob every minute that runs cgclassify -g memory:cgTeams $(pidof teams) to put every running teams process in that cgroup. Before I had set up cgrulesengined I used three cronjobs every minute running cgclassify.

Automatically put processes into a specific cgroup with cgrulesengined

This part was a bit vague online, but there exists a daemon that automatically puts processes inside cgroups based on a few rules. The startup scripts in most versions of Debian and Ubuntu are either broken or missing, but the daemon seems to work. The manpage had more information about the syntax, I'll limit the example to our usecase. Edit the following file:

Replace remy by your username, the processes (teams) and the cgroups (cgTeams) by your own. Save and check the file with:

No output means no errors. You can omit :processname to limit everything by a user, memory can be replaced by other cgroup categories like cpu, but in our situation that is not applicable. I want to limit the memory of a few specific applications, not CPU cores or other resources.

Just as with cfconfigparser, there is no default service on Ubuntu, but adding one is just as simple as the previous one.

Copy one of the configuration files:

Enable and start the service:

After a reboot you should have the processes you configured in

To check if the process actually launches in the correct cgroup after a reboot you need to use the cgroup filesystem. The file /sys/fs/cgroup/memory/cgTeams/tasks lists all the process ID's that run in that cgroup. I can see that it is working for teams: