It compiles does not always mean that it works, a tale of virtual overridden fun in C++

In a recent article on clang-tidy I referenced the fact that we're doing a huge refactoring regarding char pointers, lifetime, ownership and std::strings. Todays post is another one related to that change, where even though everything compiled correctly, it didn't work. For a compiled language, that is not something you expect. Next to unit tests, a compiler error is your number one sign that you've made a mistake somewhere. In this case however, the code all compiled fine. The issue here was an older part of the code not using override combined with automated refactoring in CLion missing some parts of the code during a change. So, the issue in this case is entirely our own fault, it was spotted in the manual testing, but I'd rather had it not happen at all. In this post I'll describe the problem including some example code that illustrates what happened. My key point is that even though the code compiles, you should always test it, preferably automated with unit and integrations tests, otherwise manually with a runbook. 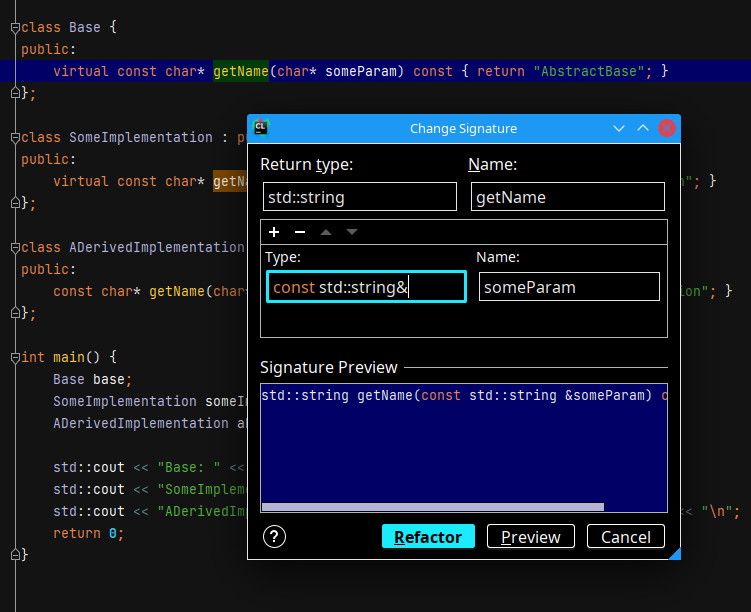 In our refactoring efforts we're rewriting a large part of the code that handles text, strings if you will. Most texts come from a configuration file (binary xml), for example, the name of a consumption (Coffee Black). In the past this config was stored on a smartcard or burned into an EEPROM, which is why the texts and translations are embedded in the config. Nowadays we'd do that differently, but refactoring everything at once is a bad idea (Uncle Bob calls this the Big Redesign In The Sky), so we do it one small part at a time.

Due to the age and size of the codebase, most of the places used a char*. Ownership of that pointer was reasonably well known, and some parts even did some RAII, but most often, lifetime, const-ness and ownership were hard to figure out.

Next to replacing all char* with std::strings and making sure the lifetimes are managed correctly, the construction paths are clearer and performance wise, due to using const std::string&, there's not much of a difference (according to our benchmarks).

Most of this refactoring was done using CLion's Refactor -> Change Signature coupled with clang-tidy checks to see wherever a nullptr was returned. Since we're talking thousands of files, this was quite a big effort. Not just changing the variable types, but also each and every instance of strncpy, snprintf, strlen and all the other C-style string handling functions. Most can be pleased by giving a .c_str(), which returns the string as a const char*. All the if blocks that check if the char* is a nullptr (to see if the string is empty in most cases) replaced by .empty() and more of that fun stuff.

This specific issue came up inside a derived method where the automated refactoring missed one such derived function. In the next paragraph I'll go into the exact issue that occurred. We caught the bug when we did our manual testing, but it all compiled just fine, so I wasn't expecting such an issue.

If you're wondering why we are so late with this change, and why we're not using a std::string_view, I'll try to address that. std::string_view does not guarantee a null-terminated string, std::string does. We have to use a few C libraries, so constructing a temporary string each time instead of using a const reference would require more changes and thus more testing, whereas we tried to keep this refactoring change as small and scoped to as possible, not changing behavior if not absolutely required. That will come in a next round of refactoring. Go read that part on the Big Redesign In The Sky, then come back here.

Why are we doing this right now and not way earlier? We only just got an updated compiler for the specific hardware we use that supports modern C++ 17, before that we had a half-baked C++ 11 with big parts either missing or not finished. Now we have a newer compiler, thus we can take advantage of newer features.

Lets start with a bit of an introduction to how C++ handles derived methods and overrides. Virtual functions are member functions whose behavior can be overridden in derived classes.

In C++ 11 the keywords override and final were introduced to allow overridden functions to be marked appropriately. Their presence allows compilers to verify that an overridden function correctly overrides a base class implementation.

Before C++ 11 there was no override keyword. virtual on non base class implementations was used to help indicate to the user that a function was virtual. C++ compilers did not use the presence of this to signify an overridden function.

That translates to the fact that as long as the signature matches, the function will override the one from its base class. If the signature differs, by accident or on purpose, no compiler error is given.

Later on in the code example, I'll make it more clear how it works with different derived classes in the old style and the new style.

A function with the same name but different parameter list does not override the base function of the same name, but hides it: when unqualified name lookup examines the scope of the derived class, the lookup finds the declaration and does not examine the base class.

A bit further on that page as well:

If some member function vf is declared as virtual in a class Base, and some class Derived, which is derived, directly or indirectly, from Base, has a declaration for member function with the same name, parameter type list (but not the return type), cv-qualifiers and ref-qualifiers, then this function in the class Derived is also virtual (whether or not the keyword virtual is used in its declaration) and overrides Base::vf (whether or not the word override is used in its declaration).

So to summarize, after C++ 11 you could actually make sure the overridden functions matched, before that it was just a sort of gentleman's agreement to not make a mistake. The virtual keyword is only required at the topmost base-class, all methods further down the inheritance chain are automatically virtual as well. (After C++ 11 you can specify the final keyword instead of override to make sure the method can not be overridden from that point on.)

The automated refactoring missed the SubDerived but all code still compiled, so I myself missed that as well. I'm not sure why it was missed, probably due to the sheer size of the amount of refactorings. I think there were at least 2500 occurrences of that specific method, maybe even double that amount.

The workflow for this refactoring was a bit repetitive:

This workflow, fixing all compiler errors until none were left, contributed to the missing of this specific issue.

Due to this being older style code, override was not used to tell the compiler that ::method() was overridden, this was pre-C++ 11 style code. It was like this:

After the refactoring, it was:

Which is perfectly fine as far as the compiler is concerned. Instead of it having an overridden virtual method(char*) in SubDerived, it now just has a normal method in SubDerived. If we instead had specified override, like below, the compiler would have given us an error:

In my case the Base class method was implemented but had a log message when triggered, telling us, very helpfully, that every derived method should implement that method themselves. Because of that log message, when we found the issue, it didn't even require a debugging session. Whereas normally the SubDerived class would do a bunch of things, now it was just the Base method logging an error and I figured out what happened quickly by looking at the two classes and their methods.

In the below example code you'll see that log as well, but for this example just with an assert. Oversimplifying a bit, assert only triggers if you build a Debug build and not a release build, but it's just to give you an idea of what happened.

Here is the example code before the automated refactoring:

Output of a Release build:

Output of a Debug build:

Now after the automated refactoring, all instances except one of the char* were replaced with const std::string&, like below:

The above example will not compile, but in our case it still compiled. I'm not sure why it went wrong, but I guess due to the sheer size of the code that was changed in the refactoring operation.

the code will compile again, but once you're making that kind of changes to your codebase you know you're on the wrong track.

After manually changing the signature (char* to const std::string&) of the method in all SubDerived classes it worked just as it worked before.

If we had used override, CLion would have drawn a big red line and the compiler would give us an error:

But, sadly, not all derived classes are modern enough to have the override attribute set in our codebase. We're improving quite a bit with modern tools like clang-tidy and CLion, however such changes take time and we're doing it slowly but thoroughly.

How to find and/or prevent this issue

clang-tidy has a check for override usage and if you use clang you can enable the flag -Woverloaded-virtual to get a compiler warning if you accidentally make a mistake and not use override:

If you do however use override and make a mistake in the function signature / parameters, the compiler (both clang and gcc) can give you an actual error:

When you start adding override to a class, you must change it for every method in that class, otherwise you'll end up with warnings like 'function' overrides a member function but is not marked 'override'.

Marco Foco from NVIDIA has an interesting post on this subject as well.