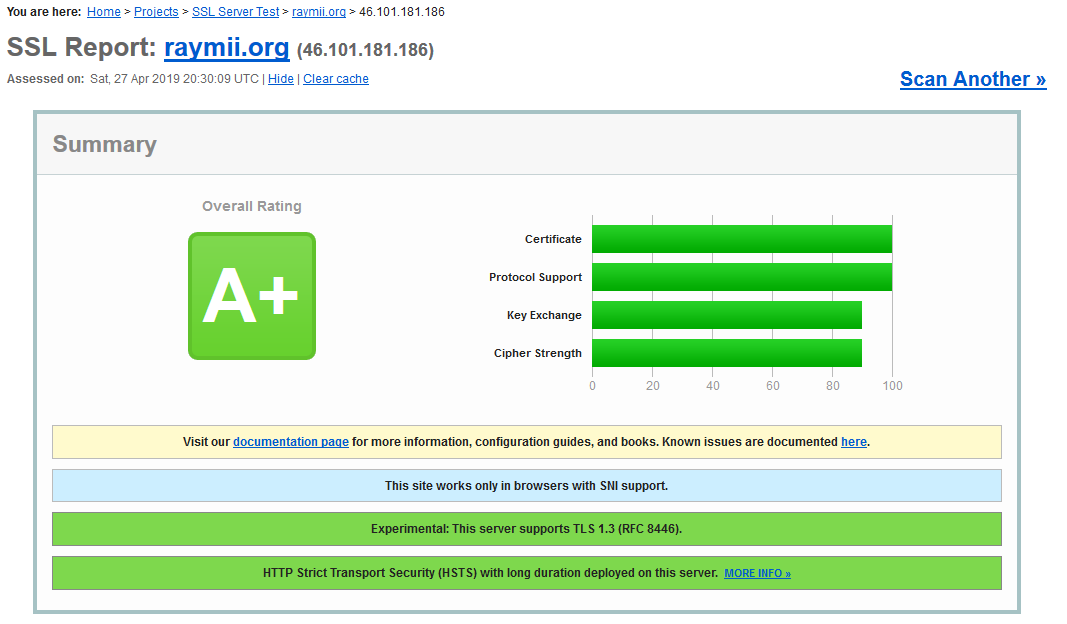 This tutorial shows you how to set up strong SSL security on the lighttpd webserver. We do this by updating OpenSSL to the latest version to mitigate attacks like Heartbleed, disabling SSL Compression and EXPORT ciphers to mitigate attacks like FREAK, CRIME and LogJAM, disabling SSLv3 and below because of vulnerabilities in the protocol and we will set up a strong ciphersuite that enables Forward Secrecy when possible. We also enable HSTS and HPKP. This way we have a strong and future proof ssl configuration and we get an A+ on the Qually Labs SSL Test.

I've written an Open Source SSL server test. You can use it to test your configuration, as an addition to the other SSL tests our there. It is fast, shows you all the information so you can make your own informed decision (no ratings), and the results are saved so you can compare different settings. You can test your site via https://ssldecoder.org.

I've also written a handy tool which notifies you when your certificates are about to expire. It is open source so you can host it yourself internally and there is a hosted version available at https://certificatemonitor.org.

I've created a website with Copy-pastable strong cipherssuites for NGINX, Apache, Lighttpd and other software: https://cipherli.st. Handy if you don't want to read this entire tutorial. This tutorial and https://cipherli.st are updated continuously as new vulnerabilities are discovered.


You can find more info on the topics by following the links below:

Make sure you backup the files before editing them!

All protocols other than TLS 1.2 and TLS 1.3 are considered unsafe.

When using lighttpd version 1.4.48 or higher, you can disable TLSv1 and TLSv1.1 as well:

Forward Secrecy ensures the integrity of a session key in the event that a long- term key is compromised. PFS accomplishes this by enforcing the derivation of a new key for each and every session.

This means that when the private key gets compromised it cannot be used to decrypt recorded SSL traffic.

The cipher suites that provide Perfect Forward Secrecy are those that use an ephemeral form of the Diffie-Hellman key exchange. Their disadvantage is their overhead, which can be improved by using the elliptic curve variants.

The following two ciphersuites are recommended by me, and the latter by the Mozilla Foundation.

If your version of OpenSSL is old, unavailable ciphers will be discarded automatically. Always use the full ciphersuite above and let OpenSSL pick the ones it supports.

The ordering of a ciphersuite is very important because it decides which algorithms are going to be selected in priority. The recommendation above prioritizes algorithms that provide perfect forward secrecy.

The CRIME attack uses SSL Compression to do its magic, so we need to disable that. The following option disables SSL compression:

By default lighttpd disables SSL compression at compile time. If you find it to be enabled, either use the above option, or recompile OpenSSL without ZLIB support. This will disable the use of OpenSSL using the DEFLATE compression method. If you do this then you can still use regular HTML DEFLATE compression.

The concept of forward secrecy is simple: client and server negotiate a key that never hits the wire, and is destroyed at the end of the session. The RSA private from the server is used to sign a Diffie- Hellman key exchange between the client and the server. The pre-master key obtained from the Diffie-Hellman handshake is then used for encryption. Since the pre-master key is specific to a connection between a client and a server, and used only for a limited amount of time, it is called Ephemeral.

With Forward Secrecy, if an attacker gets a hold of the server's private key, it will not be able to decrypt past communications. The private key is only used to sign the DH handshake, which does not reveal the pre- master key. Diffie-Hellman ensures that the pre-master keys never leave the client and the server, and cannot be intercepted by a MITM.

All versions of lighttpd as of 1.4.7 rely on OpenSSL for input parameters to Diffie-Hellman (DH). Unfortunately, this means that Ephemeral Diffie-Hellman (DHE) will use OpenSSL's defaults, which include a 1024-bit key for the key- exchange. Since we're using a 2048-bit certificate, DHE clients will use a weaker key-exchange than non-ephemeral DH clients.

Add it you your lighttpd config:

When possible, you should enable HTTP Strict Transport Security (HSTS), which instructs browsers to communicate with your site only over HTTPS.

View my article on HTST to see how to configure it.

You should also enable the HTTP Public Key Pinning Extension.

Public Key Pinning means that a certificate chain must include a whitelisted public key. It ensures only whitelisted Certificate Authorities (CA) can sign certificates for *.example.com, and not any CA in your browser store.

I've written an article about it that has background theory and configuration examples for Apache, Lighttpd and NGINX

SSLv3 allows exploiting of the POODLE bug. This is one more major reason to disable this.

Google have proposed an extension to SSL/TLS named TLS FALLBACK SCSV that seeks to prevent forced SSL downgrades. This is automatically enabled if you upgrade OpenSSL to the following versions:

In short, by tampering with an encryption algorithm's CBC - cipher block chaining - mode's, portions of the encrypted traffic can be secretly decrypted. More info on the above link.

Recent browser versions have enabled client side mitigation for the beast attack. The recommendation was to disable all TLS 1.0 ciphers and only offer RC4. However, [RC4 has a growing list of attacks against it],(http://www.isg.rhul.ac.uk/tls/) many of which have crossed the line from theoretical to practical. Moreover, there is reason to believe that the NSA has broken RC4, their so-called "big breakthrough."

Disabling RC4 has several ramifications. One, users with shitty browsers such as Internet Explorer on Windows XP will use 3DES in lieu. Triple- DES is more secure than RC4, but it is significantly more expensive. Your server will pay the cost for these users. Two, RC4 mitigates BEAST. Thus, disabling RC4 makes TLS 1.0 users susceptible to that attack, by moving them to AES-CBC (the usual server-side BEAST "fix" is to prioritize RC4 above all else). I am confident that the flaws in RC4 significantly outweigh the risks from BEAST. Indeed, with client-side mitigation (which Chrome and Firefox both provide), BEAST is a nonissue. But the risk from RC4 only grows: More cryptanalysis will surface over time.

FREAK is a man-in-the-middle (MITM) vulnerability discovered by a group of cryptographers at INRIA, Microsoft Research and IMDEA. FREAK stands for "Factoring RSA-EXPORT Keys."

The vulnerability dates back to the 1990s, when the US government banned selling crypto software overseas, unless it used export cipher suites which involved encryption keys no longer than 512-bits.

It turns out that some modern TLS clients - including Apple's SecureTransport and OpenSSL - have a bug in them. This bug causes them to accept RSA export- grade keys even when the client didn't ask for export-grade RSA. The impact of this bug can be quite nasty: it admits a 'man in the middle' attack whereby an active attacker can force down the quality of a connection, provided that the client is vulnerable and the server supports export RSA.

There are two parts of the attack as the server must also accept "export grade RSA."

The MITM attack works as follows:

The ciphersuite offered here on this page does not enable EXPORT grade ciphers. Make sure your OpenSSL is updated to the latest available version and urge your clients to also use upgraded software.

Researchers from several universities and institutions conducted a study that found an issue in the TLS protocol. In a report the researchers report two attack methods.

Diffie-Hellman key exchange allows that depend on TLS to agree on a shared key and negotiate a secure session over a plain text connection.

With the first attack, a man-in-the-middle can downgrade a vulnerable TLS connection to 512-bit export-grade cryptography which would allow the attacker to read and change the data. The second threat is that many servers and use the same prime numbers for Diffie-Hellman key exchange instead of generating their own unique DH parameters.

The team estimates that an academic team can break 768-bit primes and that a nation-state could break a 1024-bit prime. By breaking one 1024-bit prime, one could eavesdrop on 18 percent of the top one million HTTPS domains. Breaking a second prime would open up 66 percent of VPNs and 26 percent of SSH servers.

Later on in this guide we generate our own unique DH parameters and we use a ciphersuite that does not enable EXPORT grade ciphers. Make sure your OpenSSL is updated to the latest available version and urge your clients to also use upgraded software. Updated browsers refuse DH parameters lower than 768/1024 bit as a fix to this.

Cloudflare has a detailed guide on logjam.

Heartbleed is a security bug disclosed in April 2014 in the OpenSSL cryptography library, which is a widely used implementation of the Transport Layer Security (TLS) protocol. Heartbleed may be exploited regardless of whether the party using a vulnerable OpenSSL instance for TLS is a server or a client. It results from improper input validation (due to a missing bounds check) in the implementation of the DTLS heartbeat extension (RFC6520), thus the bug's name derives from "heartbeat". The vulnerability is classified as a buffer over-read, a situation where more data can be read than should be allowed.

What versions of the OpenSSL are affected by Heartbleed?

By updating OpenSSL you are not vulnerable to this bug.

If you have applied the above config lines you need to restart lighttpd:

Now use the SSL Labs test to see if you get a nice A+. And of course have a safe and future proof SSL configuration!