SSH on Windows Server 2019 (including how to sudo)

On hackernews I saw a Microsoft blog post stating that Windows Server 2019 now includes OpenSSH. In this post I'll try out both the client and server on a Windows 2019 server, including how to login as a Active Directory Domain user. All documentation from Microsoft on OpenSSH can be found here. The bonus this time is how to elevate permissions via SSH on Windows, sudo but way more complicated. This guide is also applicable on Windows 10, build 1809 and up. 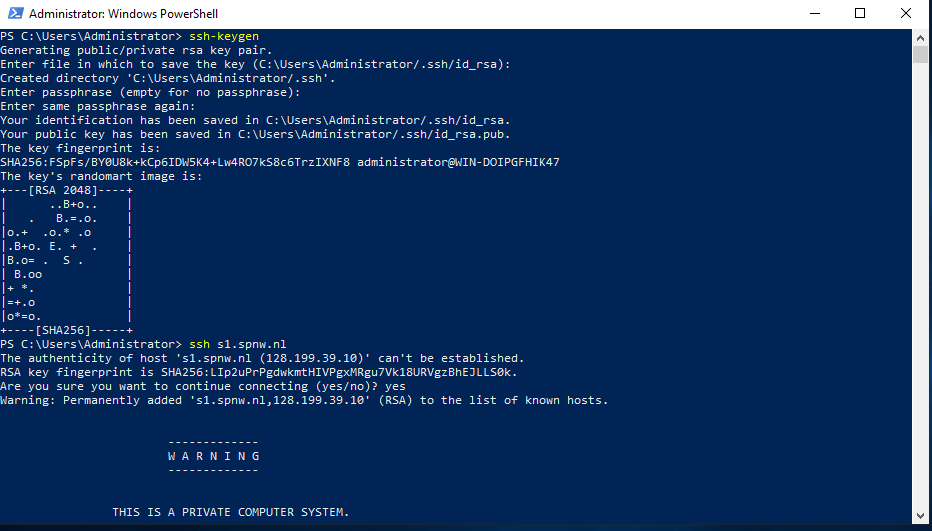 Fire up a powershell prompt as administrator and execute the following command to see if it's installed already:

If they are NotPresent, install them with the below powershell commands:

Example output for both:

I had to install all Windows updates before the server part would install (up to december 2018).

Start the openssh server and make sure it starts up automatically. Not required when you only want to use the openssh client.

The setup automatically creates a firewall rule to allow OpenSSH. Check to make sure it is actually created.

The default prompt when SSHing in to a windows server is cmd.exe. Rather bare and sparse, I recommend you change that to Powershell. It's Windows, so it has to be changed in the registry, but there is a powershell command to do so:

If you have installed bash you can set that to be the default shell by changing the full -Value path to the bash.exe binary.

Using SSH on Windows (open up a powershell window) is as simple as typing in the command and the server to connect to:

You will be prompted for a password, type it, and you're in.

However, using passwords is insecure and will get your server compromised (eventually). SSH has the concept of keys, cryptographicly secure public private keys which can be used for authentication. The rest of this section covers the creation and placement of an SSH keypair on Windows.

You want to install the ssh-agent if you are going to use Windows as ssh client:

With an ssh-agent, you don't have to type the password for your private key every time you SSH to a server.

Generating an SSH keypair on Windows

Generate your SSH keypair with the following command:

Make sure to enter a passphrase. Create a backup of the folder (C:\Users\Username\.ssh), if you loose that private key you won't be able to login anymore.

Remember that private key files are the equivalent of a password should be protected the same way you protect your password. To help with that, use ssh- agent to securely store the private keys within a Windows security context, associated with your Windows login. To do that, start the ssh-agent service as Administrator (we already did that when installing) and use ssh-add to store the private key:

Add the key to another Windows server

Using the following commands we can copy our public key (not the private, never share your private parts) to a server running SSH. I assume you know how to do this on Linux, this example is for another Windows server. The permissions are managed differently.

In this example I use the user remy in the AD domain SPCS. The format then to login is remy@spcs@example.org, the first part (remy@spcs) is the username (and AD domain), the last part (@example.org) is the server to connect to.

Create the folder where the authorized_keyfile belongs:

Use scp to copy the public key file generated previously:

Change the permissions on the authorized_keys file on the server, otherwise ssh will ignore the file:

The OpenSSHUtils powershell module needs to be installed for the Repair- AuthorizedKeyPermission cmdlet to work.

You can now login to the Windows server using your private key.

The Windows OpenSSH server is quite simple to configure. It has the regular sshd_config file for settings, with some parts specific to Windows.

This is a screenshot where I SSH into a Windows server using my linux workstation:

This section is specifically for Windows related settings. I assume you know how to configure openssh on linux.

The server reads it's configuration from %programdata%\ssh\sshd_config. You can copy and paste that path into a Windows Run dialog (WIN+R) to open Explorer in the correct location.

When configuring user/group based rules with a domain user or group, use the following format: user?domain*. Windows allows multiple of formats for specifying domain principals, but many will conflict with standard Linux patterns. For that reason, * is added to cover FQDNs. Also, this approach uses ? instead of @ avoids conflict with the username@host format.

To allow all users from the domain EXAMPLE in group Domain Admins to login via SSH:

It's better to create a specific security group (e.g. sshusers) and add the Domain Admins as a member. With a seperate group you can give or restrict the ssh permissions more granulary.

PermitRootLogin is not applicable in Windows. To deny administrators from logging in via SSH, use a DenyGroups directive:

For Windows OpenSSH, the only available authentication methods are password and publickey.

At the bottom of this article there is an alternative to sudo. How otherwise would you elevate permissions? Do note that it is quite complex.

Here are a few tips on Windows and SSH I found while using it for some time.

From a linux machine, the command ssh-copy-id can be used to copy your public key easily to another linux machine. This does not work on Windows:

You need to use the above commands listed under the SSH client section to copy the key and fix the permissions.

As you've denied access to Administrators via SSH (just as you would not allow root login on Linux), you now need to have a way for people to elevate their permissions. On linux you would use sudo su - or the likes. On Windows, there is no sudo. There is also no way to elevate permissions of an already running process.

Using the runas command fails because it cannot create a new window or ask UAC (because you're in a console SSH session).

There is a complex way of elevating your privileges. You need to run this in a powershell session as your user. First you create a Credentials object which has the username and password of the Administrator user. Then you use that $Cred object with either Invoke-Command to run a single noninteractive command, or with Enter-PSSession to get an interactive Powershell.

Note that you first need to ssh into your windows server and start powershell. This can be done with one command:

This is a screenshot of the entire process:

Note that this by default only works on localhost, not from a remote computer. Unless you change the trustedhosts you will get an Access denied error.

This is also not really like sudo, but more like setting up a new ssh session from localhost to localhost as root. (But, with powershell remoting).