Running gnash on Ubuntu 20.04 (in Docker with X11 forwarding)

As you might have noticed, I'm slowly updating servers and workstations to Ubuntu 20.04, and as always with major upgrades, things break or are removed. Earlier this week I fixed up pygopherd and today I'll get gnash running again. Gnash is not updated since 2011 and therefore, finally, removed from the Ubuntu 20.04 repositories.

Compiling gnash from source proved to be a lot of effort due to gstreamer dependencies and after a few hours I thought, why not just spin up a Ubuntu 18.04 Docker container, install gnash and forward X11. That took just about 10 minutes and now I'm happily running gnash again. In this tutorial I'll show you how to setup gnash in a docker container with x11 forwarding and host networking.

Some of my $dayjob work depends on gnash, although it's actively being replaced with QT. Gnash is a linux flash player, in our case runs on the framebuffer of an embedded device.


Here is a picture of gnash running on Ubuntu 20.04, via a local docker container: 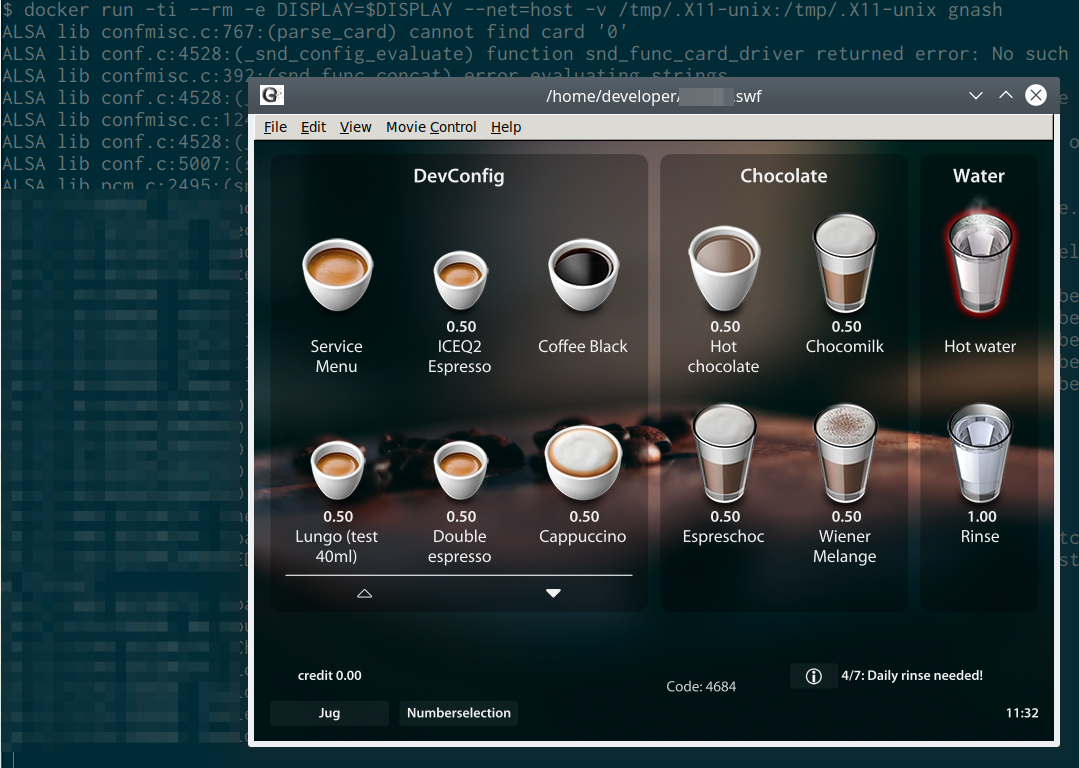 Here is gnash running on my Ubuntu 18.04 workstation, as you can see the window manager theme and styling is missing in Docker, but I can live with that. I do miss my CDE window border though: 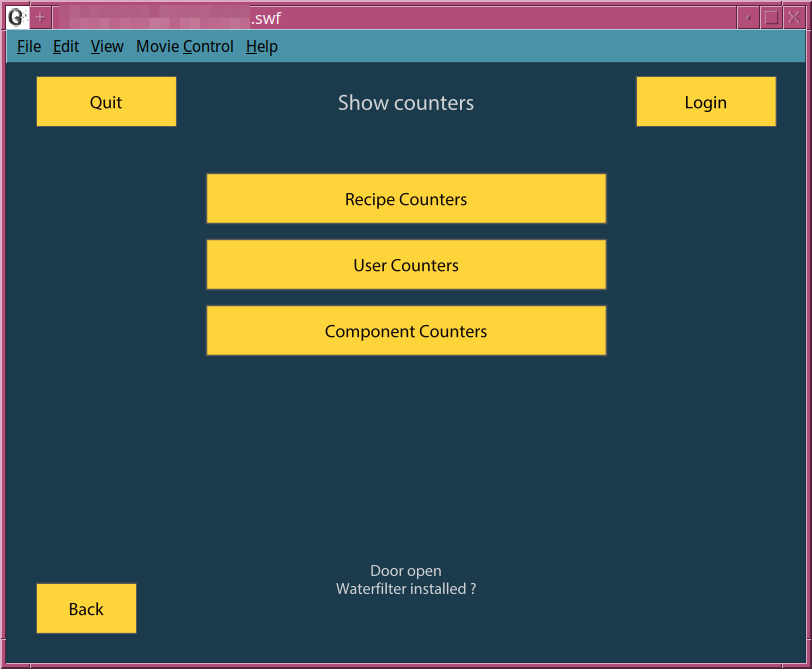 Both screenshots are showing the user interface for one of the coffee machines we develop software for at $dayjob. One shows the user facing menu and one shows the service menu, where a machine operator in this case can view all sorts of counters (beverage, user defined, components).

Lets get started. I assume you have docker installed already. Most of the X11 forwarding is taken from the article by Fabio Rehm.

Create a folder for your new docker image:

Paste the following in it:

You must replace uid=1000/gid=1000 with your user / group id, which you can find via the id command, example output:

In my case, I have a .swf file I need to run, which is included in the Docker image via the COPY step and provided to gnash with the CMD step.

The base container image is the default Ubuntu 18.04 image, in which gnash is installed, as well as sudo. Sudo and the user creation are required for x11 forwarding.

When it's finished building, you can run it with the following command:

-e DISPLAY=$DISPLAY and -v /tmp/.X11-unix:/tmp/.X11-unix share your local x11 socket and display with the container, required for x11 forwarding.

--net=host is required for me due to the software automatically connecting to a port on localhost (which I forward via SSH to an actual development board). You could omit that if your use case is different.

If you need a specific /etc/gnashrc file in your container, you must add the file to this folder (with the Dockerfile) and add a copy step in the Dockerfile:

If you make changes to the Dockerfile, you must build the container again:

That's all there is to it to run 9 year old software on a recent version of Ubuntu.