My phone serves me 400+ ads and trackers per hour. Blokada, the best android adblocker, beats 'm all! 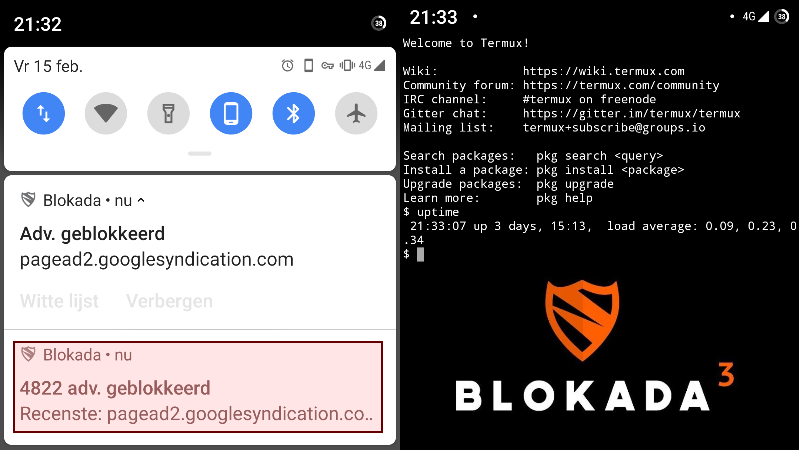 Recently I switched to a new phone. After a few years (!) my old phone stopped receiving calls making it time for a new one. The new phone has Android, which allowed me to install a system wide adblocker, Blokada.

Why do you need an adblocker? Besides not seeing advertisements and being tracked/spied on in your every move, it improves battery life, makes your device more secure (no more malicious advertisements), makes pages and apps load faster, makes your data plan (4g) last longer and most pages are cleaner to view and read. It's not just me telling you that, the big antivirus and security software vendor AVG says the same.

Blokada works by posing itself as a local VPN, filtering advertisements, trackers and all kinds of nasty things that spy on you or bring in malware. It does not require root access on Android, it's open source and best of all, it works very well.

To my big surprise after three days of using my phone (after everything was set up and transferred), Blokada blocked almost 5000 (five-thousand!) advertisements and tracking requests. That's more than 70 requests an hour, so an ad every minute (if you would use the device for that 72 hour period). According to the Google Wellbeing statistics, in those three days, I used my phone actively for 12 hours. That means my phone served me more than 400 ads or trackers per active hour.

But those ads/trackers are not just served only when the phone is in use. Just before I went to bed, I reset the counters, when I woke up it had blocked 400 requests already. That means, even when I'm sleeping and not using my phone, it is being used to spy on me (tracking) and to serve advertisements.

Blokada is free and open source software and can be found on blokada.org. I recommend you install it. With the default adblock list (energized blu) plus the tracker list, I have not found any sites or applications that did not work, the user experience is just as it would be without blokada. Battery life is still the same, maybe even a bit better.

On the desktop (browser) I recommend uBlock Origin.