One of my Raspberry Pi's would not boot up after a reboot. The SD card was corrupted, sadly beyond repair. This article walks you through the steps I took to try to fix the SD card, including fsck, badblocks and other filesystem utilities. It also has tips to reduce the writing on the Raspberry Pi, this to save SD cards from some amount of wear and thus possible corruption.

The machine was running as an FM transmitter so that my regular sound system could play podcasts (Please note that it is probably illegal to transmit without having your HAM license). I't would sync up my feeds and, when turned on, started playing them.

However, after the last reboot it would not start up again. I rigged up the UART to my machine and found out why, there were files that the system could not read, therefore init would not boot up.

2019-11-13: update the fstab entries to use tmpfs instead of none, and add correct permissions.

The file system consistency check utility most of the time is able to find and recover damaged filesystems. My systems do a filesystem check at every boot, and they get a reboot regularly. The SD card has an ext4 filesystem and is 16 GB in size.

Since most of the time you can fix broken filesystems with an fsck I hooked up the card to my machine and started the fsck:

And it failed right away:

So the card is so broken that the first superblock is not readable. An ext4 filesystem has multiple copies of it's superblock, so lets find them and use them to try the fsck again. To find the other superblocks we can use the following command:

We also need to find the block size, the above command shows it as 4k, which is 4096. With this information we can retry the fsck with the alternate superblock:

Where -b is the alternative superblock and -B is the blocksize.

It didn't help much, after a lot of questions I decided to automatically fix everything it found:

Adding the -y option to the command will automatically answer yes to everything:

This goes well for a while, but fails after some time with the following error:

Searching around on the web results in multiple topics suggesting to add the following:

To the file /etc/e2fsck.conf. The man page describes it like so:

Ted Tso explains what this option does on this mailinglist topic:

This will cause e2fsck to store certain data structures which grow large with backup servers that have a vast number of hard-linked files in /var/cache/e2fsck instead of in memory. This will slow down e2fsck by approximately 25%, but for large filesystems where you couldn't otherwise get e2fsck to complete because you're exhausting the 2GB VM per-process limitation for 32-bit systems, it should allow you to run through to completion.

You have to create the /var/cache/e2fsck folder if it does not exist yet before running the fsck:

The scratch_files stanza has more options, two of which might be important, set dirinfo and set icount.

There was also a good explanation of where the Out of Memory error comes from on Stack Exchange, it might not be out of memory.

The scratch_files setting did not improve the check. It still gave the same error, out of memory.

Even after playing with the dirinfo settings, or adding a 200 GB swapfile the fsck would still fail. dmesg was also full with these kinds of logs:

My last guess would be to try Spinrite. Spinrite is a hard drive recovery and maintenande utility written by Steve Gibson from Gibson Research Corporation. I configured a KVM VM with the card reader device as a second block device and tried to run Spinrite on Level 2. However, even spinrite failed: 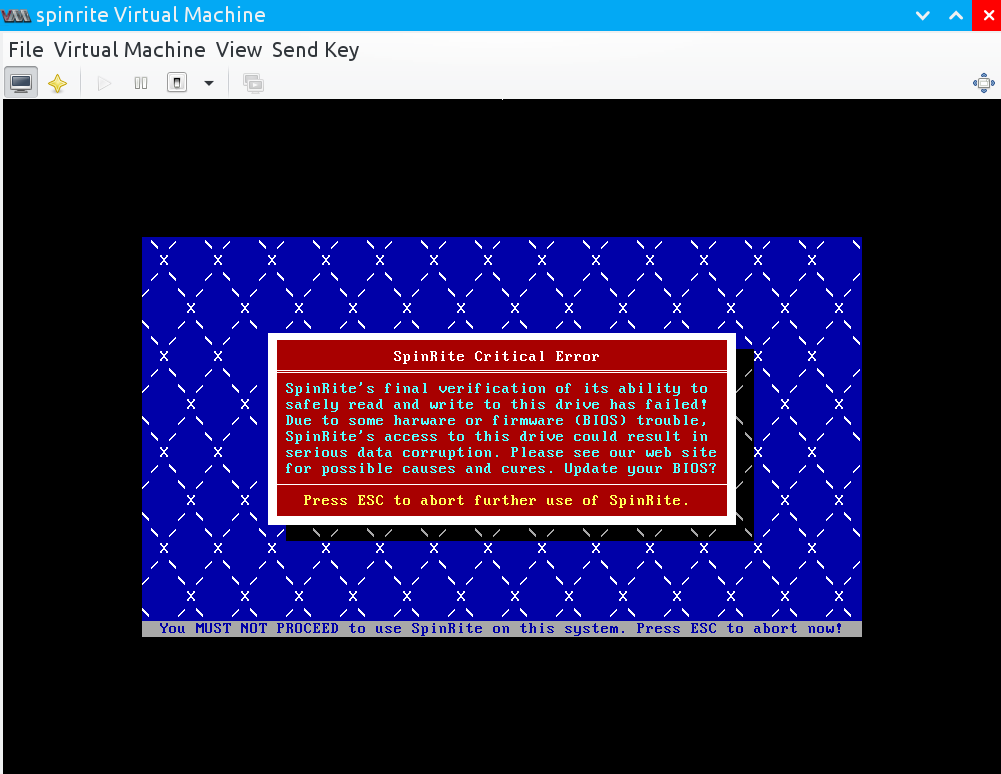 Booting Spinrite on a spare laptop with a cardreader with this SD card gave the same error. It sees the device, but fails to run on it.

Spinrite has helped me multiple times recover drives, but this one might be to much for it.

Badblocks is a *NIX utility to search for bad blocks on a device. While it is not usefull for creating a list of bad blocks on the SD card because SD cards do not report actual physical addresses (because of wear levelling) it does tell us if the card is broken or not.

The following badblocks command will scan and report bad blocks for the device. It is a destructive write operation, you will lose your data.

It showed me that a lot of writes were failing:

This SD card is a lost case. To prevent your Raspberry Pi's from writing a lot of data, and thus, wearing the SD card, you can do a couple of things.

The first one is to mount a few folders in RAM as tmpfs. The folders are the folders where temp files and logging is written to. This means that you won't have syslog available, but most of the time that is not a problem.

Edit /etc/fstab and add the following:

This will mount the above folders in RAM, with a respectable max size (otherwise your ram fills up). The noatime option means that the access time of a file is not updated, saving a lot of writes as well. You should also add the noatime option to your other partitions, for example on a standard Raspbian:

Here the /boot partition is also mounted read only (ro). The noatime option is added.

Issue a mount -a command or reboot the machine to make this active.

Linux divides its physical RAM (random access memory) into chucks of memory called pages. Swapping is the process whereby a page of memory is copied to the preconfigured space on the hard disk, called swap space, to free up that page of memory. The combined sizes of the physical memory and the swap space is the amount of virtual memory available.

Swappig causes a lot of writes to the SD card. You would want to turn it off to save writes. The downside of this is that when there is not enough RAM available the linux OOM killer will randomly kill processes to save RAM.

Raspbian by default has a swap file, dynamically managed by the dphsys- swapfile utility. You can turn off this utility by issueing the following commands:

After a reboot the swap will be gone, which you can check with the free -m command:

fsck at every boot

My Raspberry Pi's have a cronjob which reboots them once every seven days. This to apply kernel updates and just a general good procedure to see if all still works after a reboot. By default, fsck checks a filesystem every 30 boots (counted individually for each partition). I decided to change this to every boot, so problems will be found and possibly fixed earlier.

To set up an fsck at every boot, execute the following command:

Where /dev/sda1 is the device or partition.

I don't use the Raspbian GUI so I decided to remove everything GUI related. The best way to do this is to remove libx11 and all it's dependencies, that being all the GUI applications:

This SD card was so corrupt I threw it away. The Raspberry Pi was reinstalled and the pifm software was set up again. The music came from another machine, so that did not have to be copied again.

With the tips above you might be able to save your SD card if it ever gets corrupted. These tips also work on regular disks and SSD's.