Bash Bits are small examples and tips for Bash Scripts. This bash bit shows you how to add coloured output to your scripts.


All Bash Bits can be found using this link

A little background first on how this all works. Coloured output has to be supported by your terminal emulator, but most modern ones support it. It works by sending specific control codes to your terminal.

Terminal (control-)codes are needed to give specific commands to your terminal. A terminal control code is a special sequence of characters that is printed (like any other text). If the terminal understands the code, it won't display the character-sequence, but will perform some action. You can always print the codes with a simple echo command.

Because there's a large number of different terminal control languages, usually a system has an intermediate-layer to talk to it. The real codes are looked up in a database for the currently detected terminal type and you give standardized requests to an API or (from the shell) to a command.

You can read more about terminal control codes and tput in the terminfo(5) manual page, click this link for the online version

When I need to use colours in my scripts I often just use red and green. I have a set of functions which I use named after the colour:

Then when I need to colourize some output I can just use the function like so: red "Error: Something went horribly wrong...". Down below you can find sample code which should print text in all the above defined colours:

This image shows you how it looks on my terminal: 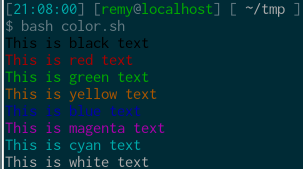 And last but not least here is a bash command which prints out all colour that your terminal supports. Good to test if you have 256 colours enabled or not, plus it shows you the number to use with tput for that colour.