❗ This post is over seven years old. It may no longer be up to date. Opinions may have changed. 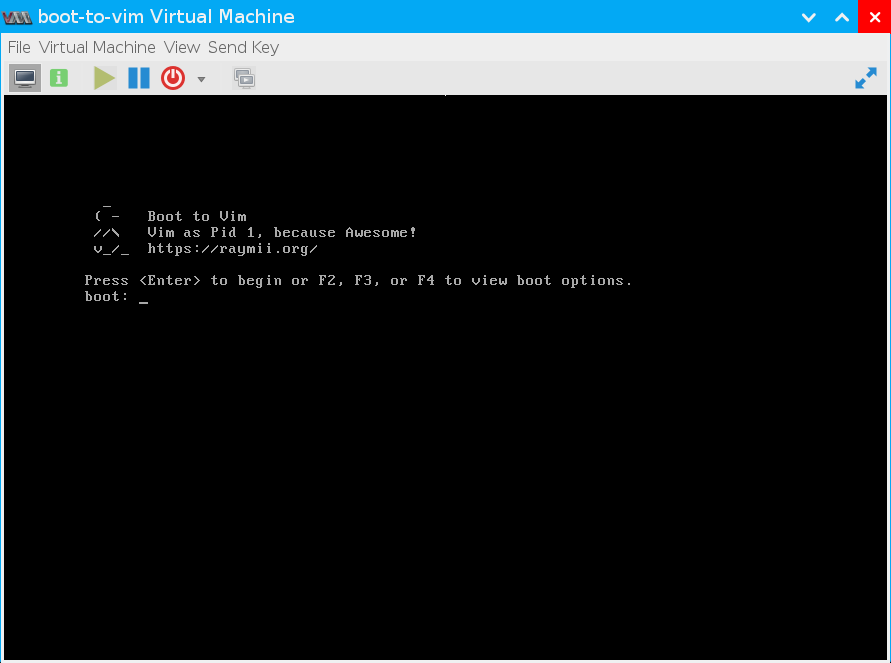 This is a response on a great article from Pascal Bourguignon, namely how to run Emacsas PID 1.

As we all know, nobody uses emacs.

The above statement is ment to start a flamewar. Please do so, see the contact page to contact me.

No, all joking aside, I found it to be a good article and wanted to see how I could do that with Vim. Not in User Mode Linux, but by creating an actual ISO. Boot to Vim, as you might want to call it.

This is actually fairly simple. Compile vim statically, set it as init= at boot and you're done.

We are going to use small (9MB) distro named Tiny Core, Core edition and customize that to boot right into our static build of Vim.

Please read and follow my tutorial on building a statically linked Vim. This will give you an executable we will use later on in the tutorial.

You will need a few tools to build the ISO, namely cpio, tar, gzip, advdef and mkisofs. These can probably be installed with your package manager. Please do that first.

First create a folder for building:

Also create a few folders for the ISO build:

Copy the files from the ISO:

This creates a /tmp/boot folder with the core.gz and boot loader. Don't forget to umount it:

We will use the /tmp/boot folder later on when putting back together the ISO.

Go into the folder where we will extract the core.gz root filesystem:

Use zcat and cpio to extract the core.gz rootfs:

We now have an extracted root filesystem:

Place the earlier built static Vim in the bin/ folder:

You can do more customizations, for example, editing the boot loader message. That is in a file named boot.msg in /tmp/boot/isolinux/:

To boot in to Vim right away we need to change the init configuration. Edit the following file:

Do note that this does not actually make Vim PID 1. Init will still manage Vim, and do stuff like fsck and mount the root partition read/write. If you want to go barebones, add init=/bin/vim to the bootloader (isolinux.cfg). Then, from Vim, do :!fsck /dev/sda and mount -o remount,rw /.

Make sure you are still in the extract folder. Issue the following command to build a new tinycore.gz file which the ISO will use as it's initramfs:

Copy that over the original core.gz file in /tmp/boot which we copied ealier:

Create a new folder for the new ISO build files:

Copy the /tmp/boot folder to it:

You now have a file in /tmp named Boot_to_Vim.iso:

You can use this to boot a VM, or burn an ISO. If you exit vim, it will restart.

You can start up a real shell by giving the :!sh command, in command mode. To shut down, issue the :!halt command.

More info on remastering Tiny Core can be found here. 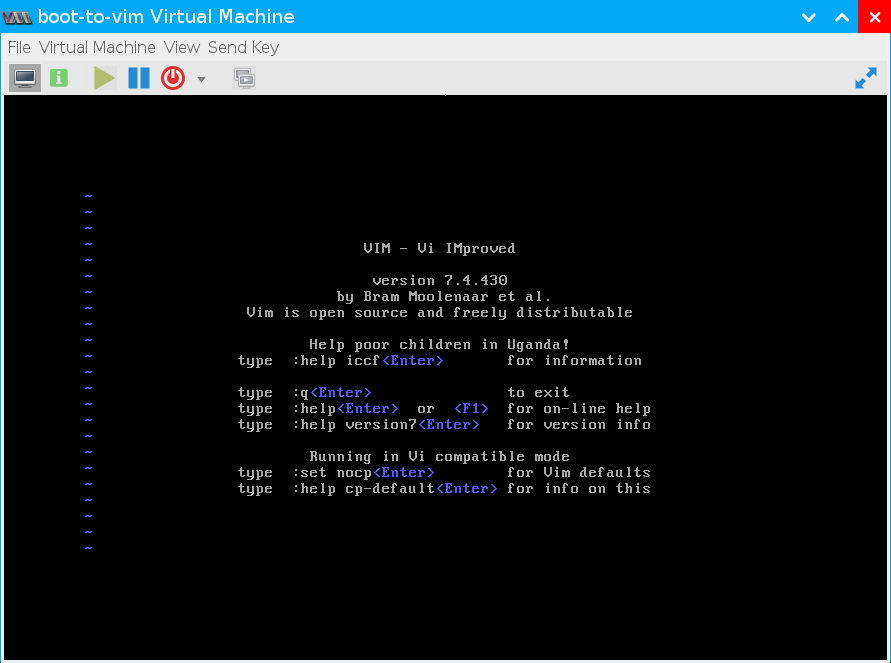