In this series of articles I'll cover old computer advertisements. You might know I like retro computers like the PDP-8 and OpenVMS, but these old magazine advertisements show a whole range of other cool systems. Both for consumers and businesses, including pricing and technical terms. In the series I'll look at the advertisements, give you some history and if available, current status and other fun facts on the system.

All articles in the retro PC ads series are found here.

The Sphere 1 was a personal computer from 1975 built around the Motorola 6800 CPU. It was built by Sphere Corporation, located in Bountiful, Utah. Marketed as the first real computer (due to having a built in keyboard and monitor) targeted at consumers, it ran PDS (program development system) and included an editor, assembler and an edition of BASIC. The first few editions came as a kit, later on fully assembled units were available. 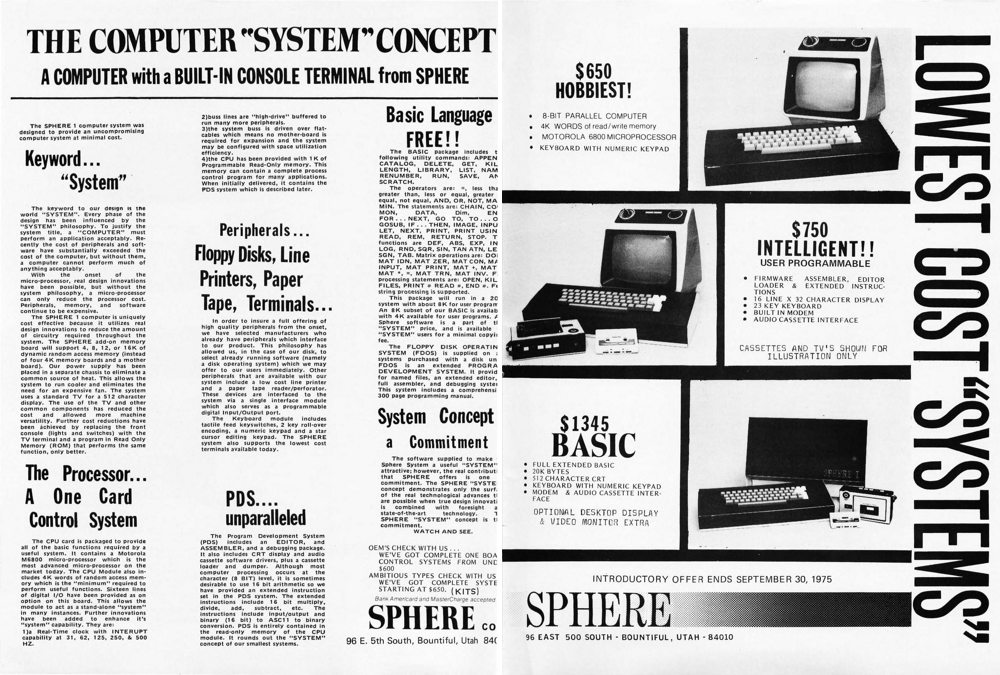 The advertisement is located in the first issue of Byte magazine. Byte magazine was a computer magazine started in 1975, all of the old issues can be read online the archive.org.

The two page advertisement starts off with a big header stating that it shipped with a built in console terminal. In that timeperiod, most computers were big bulky business mainframes, had front panels with lights and switches or had to be plugged in to a television. So providing an all in one system was a big selling point for businesses. The front panel was replaced by the operating system (named Program Development System or PDS) allowing users to type in their commands instead of toggling switches and reading memory addresses from lights.

The power supply is in a seperate chassis, to eliminate heat, therefore the system had no built in fan. The terminal provided with the system has a 16x32 character resolution, the keyboard has 23 keys, including a numeric keypad. I'm not sure if it was a seperate numpad block or if it was a number row since the pictures show different keyboards. The keyboard has "tactile feed keyswitches", 2-key rollover and a star cursor block (not the arrow key layout we have today, that's an inverse T layout).

This is a picture of a later model Sphere 1: 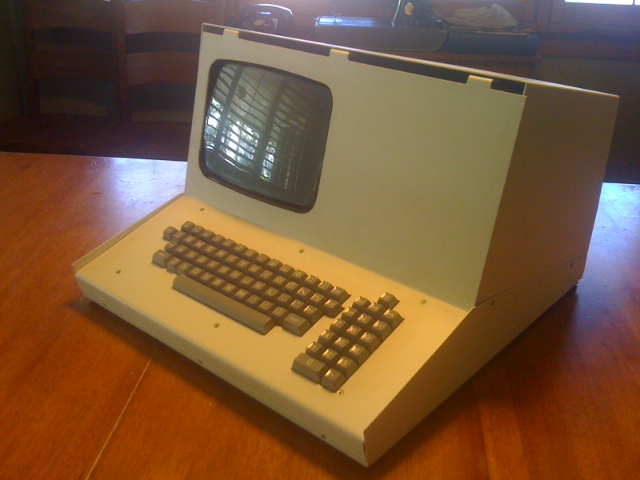 The system has 4K of RAM and can be extended with a memory board to 16K of RAM. More RAM was required for the extended BASIC package. The CPU, the Motorola 6800, is an 8-bit CPU and ran at 1 MHz. Different peripherals were available, in the ad it states printers, paper tape readers and floppy disks. There was a programmable digital input output port where these plugged in, so I guess you could only use one peripheral at a time.

The Sphere 1 included a keyboard operated reset feature consisting of two keys wired in series that sent a reset signal to the CPU triggering a hard reboot. Wise considered this to be the first keyboard activated reset, a predecessor to the now-common Ctrl-Alt-Delete key combination. The Sphere keyboard has two reset switches and both had to be press at the same time. One was in the upper right of the keyboard and one was in the lower left, thus a reset required two hands.

The operating system, as stated named PDS, was on 1K of read only memory. It includes an editor, assembler and debugger. A BASIC package was available, the advertisement lists all the supported BASIC commands. There is a mention of the "FLOPPY DISK OPERATING SYSTEM", an extended version of PDS with extended tools (editor, assembler, debugger) and support for a file structure (naming files).

Kits started at 650 US dollar for the "HOBBIEST" edition. 1345 US dollar got you the full system with BASIC, the assembler, editor, terminal, cassette tape unit and a modem.

I like that the advertisement starts off as a regular advertisement, but does a technical deep dive right away. According to Wikipedia, the Sphere 1 was discontinued in 1977 and sold 1300 units. The company, Sphere Co, went bankrupt in that year. The inventor of the Sphere 1, Michael Wise, was the president of Sphere Co. up until March 1976. He died in 2002.

Converting the price (inflation) to 2019, the systems comes in at 6338 US dollar. (source). The Sphere Co. no longer exists but the creator of the Sphere 1 (Michael), was later involved in the development of the TRS-80 and Commodore PET.

The Sphere 1 had the following specs:

A technical brochure of the Sphere 1 can be found here.